Peregrines don’t bring in material to build a nest, they simply make a shallow depression in substrate with their feet to stop eggs rolling away. Often the place where the eggs are laid is called a ‘scrape’ or a ‘ledge’ rather than a nest.

Peregrines typically lay eggs in March, with the eggs hatching roughly 4 to 5 weeks later at the end of April/beginning of May. However, the York Minster Pair kept us waiting in 2015.

Early in March 2015 the male peregrine was often seen perched on the balcony parapet of the north-west bell tower, before dropping down out of sight and reappearing a few minutes later in an arch of the parapet before flying off. While out of sight, ‘creaking’ calls were often heard.

At this time, the female was mostly seen perched on one of the grotesques either side of the belfry window on the North face of the Minster’s north-west tower.

16th March: The male was seen performing 3-minute display flight high over the city while the female clucked at him from the NW tower.

31st March: Female at right end of balcony parapet, begging for food as the male chased pigeons over Dean’s Park

7th April: Mating was first observed – the pair up on a grotesque on NW buttress.
Following this there were two ledge presentations of food with the female accepting the offerings by the calling male. 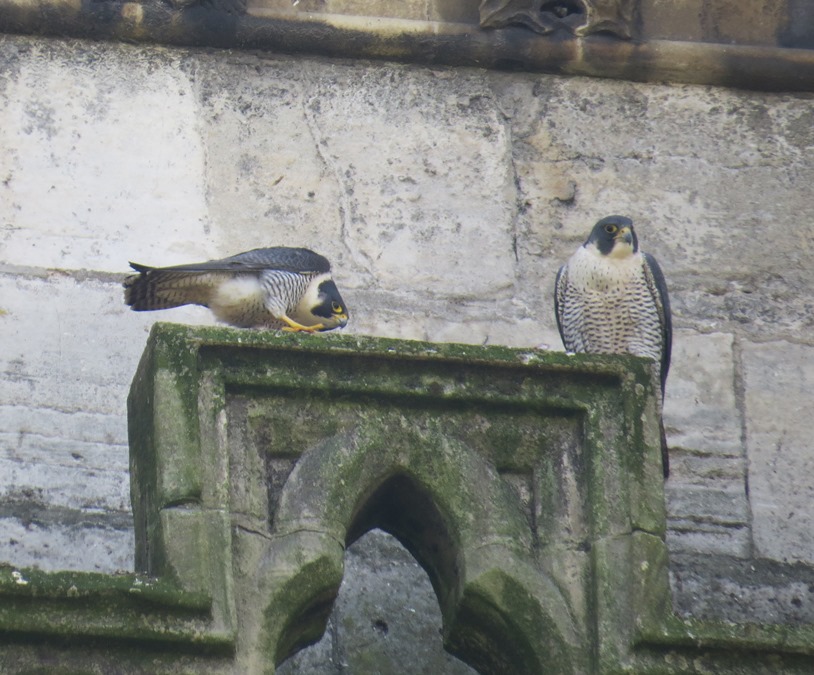 20th April: Tiercel bowing his head in a courtship display – but the female doesn’t look interested.

14th May: Robert Fuller observed a nest relief in the morning “I think this is Day 1 of incubation”.

During the next month, nest reliefs (the birds swapping over on the scrape) were often observed, often with the male bring food in for his mate.

15th June: Evening, Male brings small prey item to balcony, female appears from balcony, onto parapet. Takes prey item from male, then hops back down to nest scrape with the food – presumably to feed a chick?

So the breeding season came to a disappointing conclusion with the nest abandoned.

Why the breeding attempt failed is not known, but it could have been that the scrape was damp due to drainage problems on the balcony.

Unfortunately it was not possible to view the nest site, so we don’t know how many eggs were laid, or how many hatched.

Sometime later an eggshell was found in the fenced-off area below the balcony, proving that at least one egg had been laid.

After the breeding attempt, the adult birds remained resident on the Minster for the rest of the year.

A peregrine egg shell found below the NW tower.

Posted in Past Years Tagged with: Breeding, Eggs, Nesting